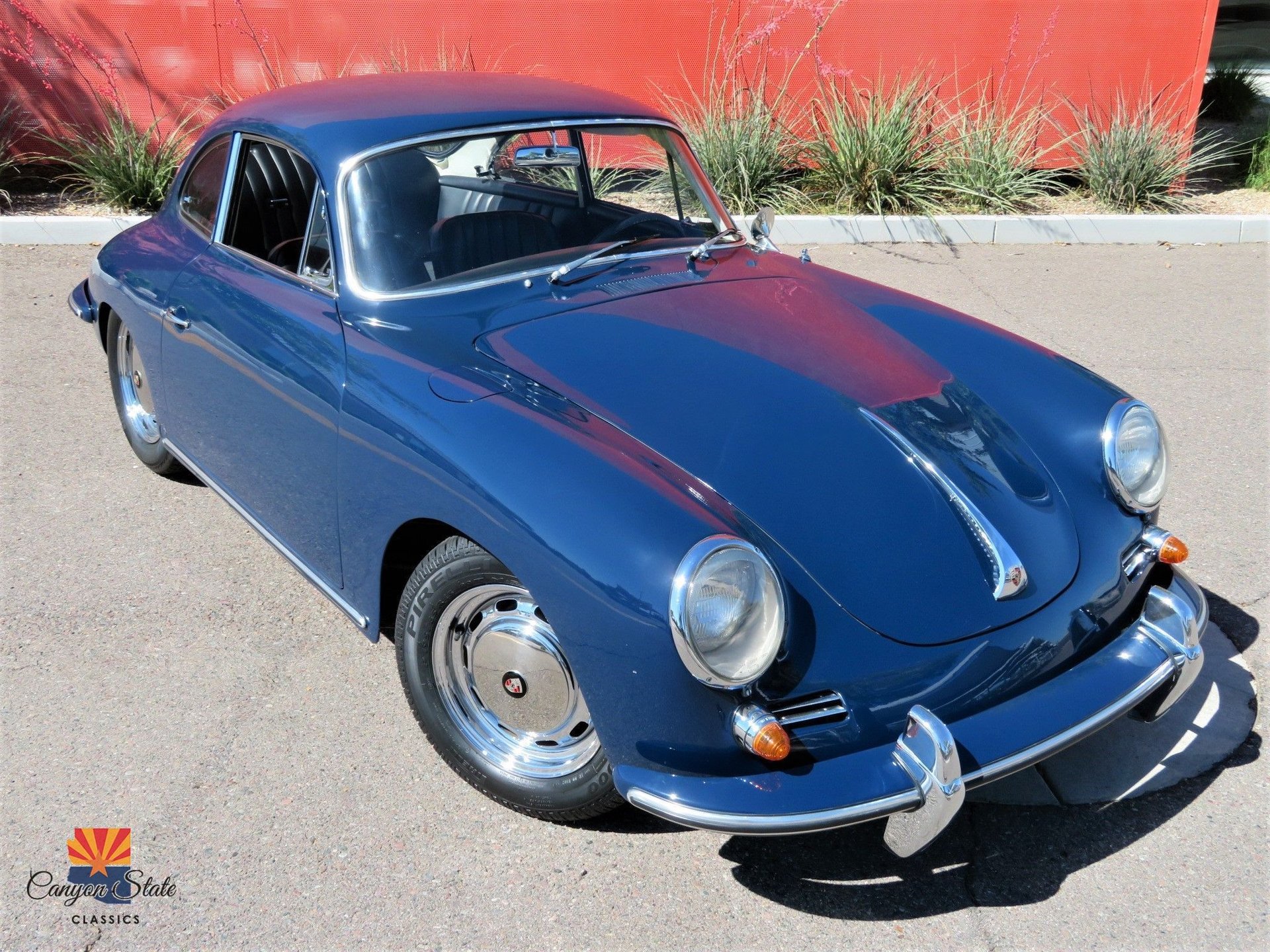 This 1964 Porsche 356 SC Coupe has lived a very special and protected life since its current owner bought it as a 2 year old used car back in 1966. This car was a CA black plate car with pictures from the late 60s and early 70s to show its heritage. This car only lived in California and Arizona during its 54yr current ownership. The car has been fully restored during that time including a full overhaul of the numbers matching engine and a bare metal repaint many years ago that is still holding up well to this day. The car is as solid and sorted as you will find. One of only 1738 SC Coupes built for 1964!

The 356 was a lightweight and nimble-handling rear-engine rear-wheel-drive 2-door sports car available in hardtop coupé and open configurations. Engineering innovations continued during the years of manufacture, contributing to its motorsports success and popularity. Production started in 1948 at Gmund, Austria, where approximately 50 cars were built. In 1950 the factory relocated to Zuffenhausen, Germany, and general production of the 356 continued until April 1965, well after the replacement model 911 made its autumn 1963 debut. Of the 76,000 originally produced, approximately half survive.

In September of 1961 Porsche introduced the 1962 356 B model which was changed to the T6 body type with twin rear deck lid engine grilles, an external fuel filler in the right front wing/fender and a larger rear window in the coupé. It is interesting to note that the Porsche factory didn't call attention to these quite visible changes with a different model designation from the T5 body. However, when the T6 got disc brakes in 1964, with no other visible alterations, they called it the model C, or the SC when it had the optional extra powerful engine.

The 356 was created by Ferdinand “Ferry” Porsche, son of Ferdinand Porsche Senior, and was originally conceived as a small, lightweight sports car that shared design characteristics of the Porsche-designed Volkswagen Beetle that was developed by prior to WWII. Believed to have taken its name from being the three hundred and fifty sixth Porsche design, the 356 was the first production automobile to bear the Porsche name. The 356SC or “Super Carrera” was first introduced alongside the 356C in 1963. The third generation 356 is often considered the fully evolved 356 by enthusiasts with upgraded handling and the addition of 4-wheel disc brakes which ensured adequate stopping power. Engine choices remained the same as the B generation, except with the addition of the SC model which offered a more powerful pushrod 4-cylinder Porsche engine with an incredible 95 horsepower. The 356SC was produced in limited numbers as only the most discerning drivers paid for the engine upgrade. 356 production would come to an end in 1965 to make more room for the 900 series line that was introduced during the prior year, but the legacy of the 356 and the 356SC in particular lives on in the hearts of motoring enthusiasts and collectors worldwide.

The last revision of the 356 was the 356C introduced for the 1964 model year. It featured disc brakes all round, as well as an option for the most powerful pushrod engine Porsche had ever produced, the 95 horse power (71 kW) "SC". 356 production peaked at 14,151 cars in 1964, the year that its successor, the new 911, was introduced to the US market (it was introduced slightly earlier in Europe). The company continued to sell the 356C in North America through 1965 as demand for the model remained quite strong in the early days of the heavier and more "civilized" 911. The last ten 356's (cabriolets) were assembled for the Dutch police force in March 1966 as 1965 models.