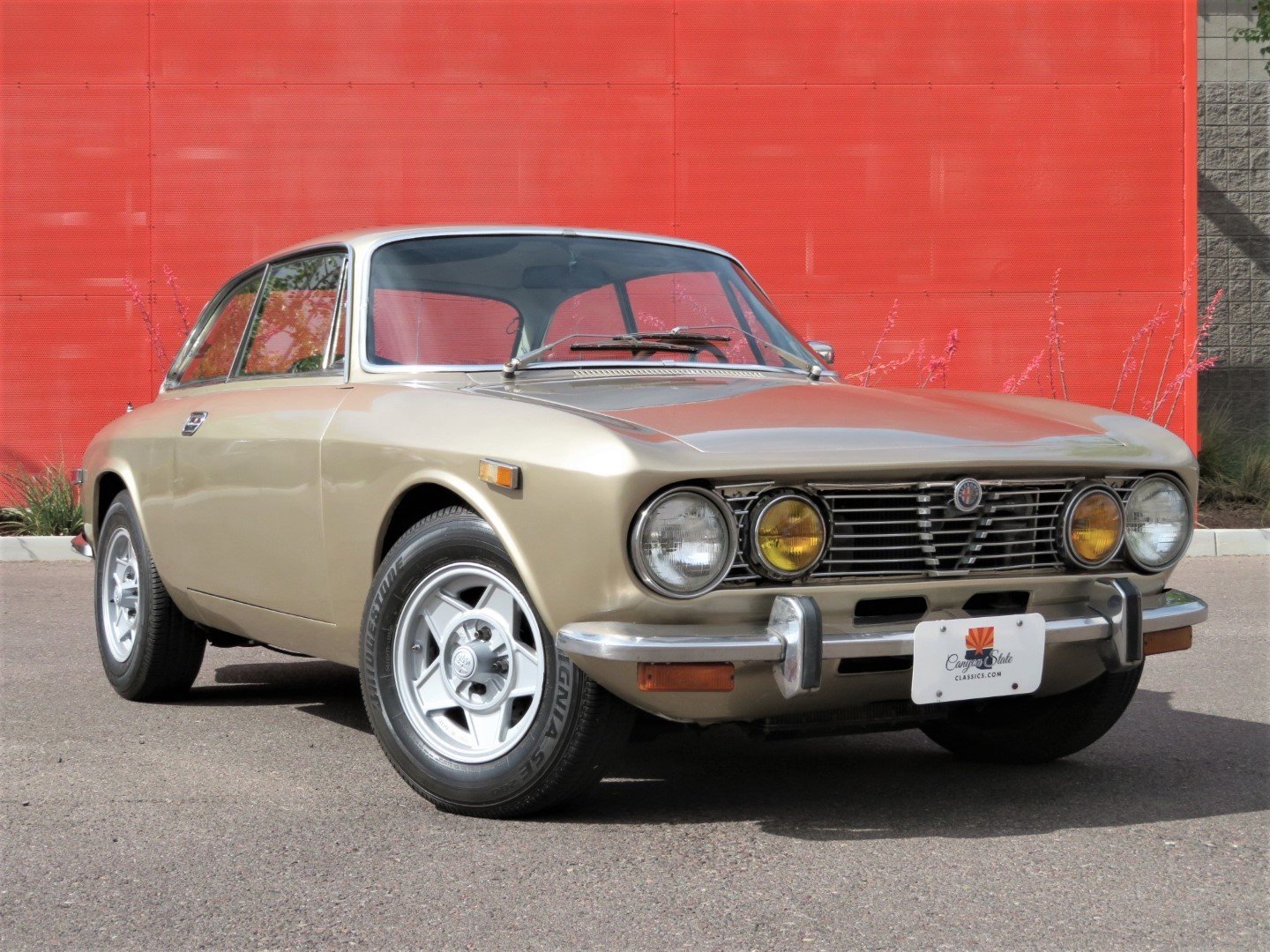 This week, Canyon State Classics presents this beautiful 1972 Alfa Romeo GTV 2000 in champagne metallic over black vinyl interior. In 1971 Alfa Romeo Released another iteration of the GTV with a larger displacement engine as well as updated interior trim, with the most notable differences being the introduction of a separate instrument cluster, instead of the gauges installed in the dash panel in earlier cars. With a 2000 (1962 cc) twin-cam 2.0-liter four-cylinder, the model nomenclature was changed to 'GTV 2000' to reflect the model's upped displacement. While most markets continued to receive carbureted powertrains, North America spec GTV were given an all-new SPICA mechanical fuel injection system.

This car was said to have been restored in California by the previous owner approx 10 years ago. 1972 Alfa Romeo GTV. Runs and drives great. Great interior. This is an ideal daily driver. Only 2 owners....

The car had a mechanical restoration approximately 5 years ago the 2000cc engine was rebuilt with high performance parts including Carrillo rods, Medtronic pistons and over sized valves. The transmission was rebuilt with a 911 clutch assembly so says the previous owner (no receipts to document)

This car has great curb appeal. However there are blemishes on the paint, bumpers.The car suffered a minor accident 5-10-01 rear driver quarter panel (see pics) that branded the vehicle with a salvage California title. Absolutely no structural or frame damage. The vehicle is nice and tight, doors close nice and solid. I would say this vehicle is 99.5% rust free besides for a very small hole in trunk pan and a small bubble on paint (see pics).

I CAN FORWARD MORE PICS & INFO

This Alfa shows just over 74k miles and is believed to be original! Mid-70's Italian cars are sky rocketing in value, dont miss your chance to own a piece of the market while being able to drive and enjoy it as your investment appreciates!

This 1972 Alfa Romeo is equipped with the following options:

The body on this Alfa is in very nice shape and has been refinished in it's the factory color of champagne metallic. In the early 90's the GTV was hit on the passenger rear corner panel. The damage was not structural, but because of the low market value of these cars in the in the early 2000s, it was issued a CA salvage title. At the time, these cars were trading in the 10-15k range and the insurance company didnt want to deal with fixing the car. The Alfa was correctly repaired before the restoration that followed almost a decade after. This car has great curb appeal however there are some blemishes on the paint. This car was driven and enjoyed after its restoration and it shows a bit here and there. The bumpers have a few minor dings and scuffs as well. Make no mistake, this is still a nice driver-quality example. All panels line up nicely and the doors close solid as they should. The exterior is rounded off with the Cromadora Daytona wheels wrapped in almost new radials.

This car is a great starting point to completely restore or enjoy as it is. The nice part is this is an overall extremely solid west coast example with low miles on the chassis and a nicely restored engine. I can assist with International Export and nationwide shipment. Call Jon @ 480-703-2337