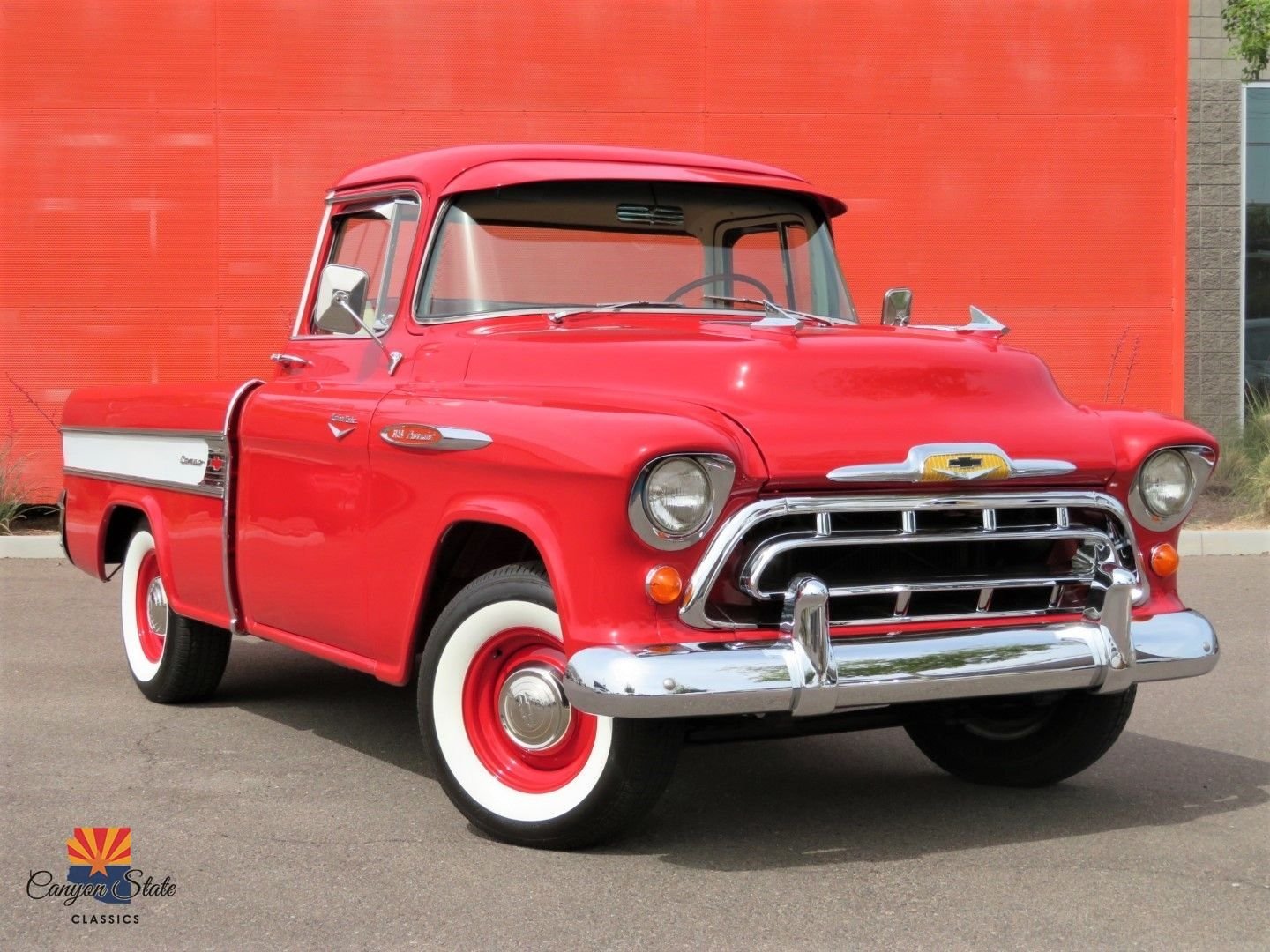 The mid-1955 introduction of Chevrolet's Cameo Carrier pickup truck helped pave the way for the El Camino. Although it was a model variant of Chevrolet's Task Force light-duty pickup, the Cameo offered an array of car-like features that included passenger-car styling, fiberglass rear fenders, two-tone paint, a relatively luxurious interior, as well as an optional V8 engine, automatic transmission and power assists.

The Chevrolet Task Force was Chevrolet's successor to the Advance Design trucks. The Task Force Series ran from late 1955 (second series) through 1959. The 1955 Second Series offered standard options and add-ons such as 12-volt electrical systems, the first V-8 (the 265 cubic inch) and fleet-side six-, seven- and eight-foot length beds.Chevrolet sent shock waves through the pickup truck industry after it unveiled the Cameo Carrier. Now, you can make some waves at your next cruise event or monthly car show with this 1957 Cameo Carrier, available from Canyon State Classic Cars. This example was built in GM's Flint, Michigan assembly plant and still retains its correct iconic fiberglass rear fenders and tailgate.

Dressed in Commercial Red with Bombay Ivory accents, the paint and trim are in very good condition having just undergone a complete restoration. The truck came from the factory with fiberglass rear fenders and the exterior tailgate panel. The glass panels are in excellent condition and the truck's lights are in similar excellent order. This truck rolls on wide white radials, size P225/75R15, surrounding red wheels and factory wheel covers. The truck's body panels are straight and solid and include visors over the Sweep-Sight wraparound windshield and doors. The truck has the Full View Rear Window, which is also wraparound. The cargo bed contains a wood floor in good order. The engine bay is very tidy and the battery appears new.

Under the hood is a 350 CID V-8 engine with dual exhausts bolted to a Turbo Hydramatic 350 three-speed automatic transmission. Everything is fresh mechanically with a rebuilt engine, freshened up transmission, new starter, fuel pump, engine and trans mounts, and a fully overhauled brake system.

Opening either door reveals hidden running boards and a red-and-white bench seat that is in excellent shape. The red carpeting is in very good condition, as is the white headliner, red metal instrument panel and three-spoke Chevy steering wheel and white door panels. The mirror glass and shift lever are in good order. The truck has power wipers, 4 guage cluster (showing 250mi since restoration), and heater and power fan.

Overall this is a gorgeous rust free, well restored, show stopper of a pickup and is ready for any car show or cruise in. Heck with that V8 power, use it to run some Sunday errands and throw a few bags of mulch in the bed and do some truck stuff! Call Jon @ 480-703-2337 with any questions!