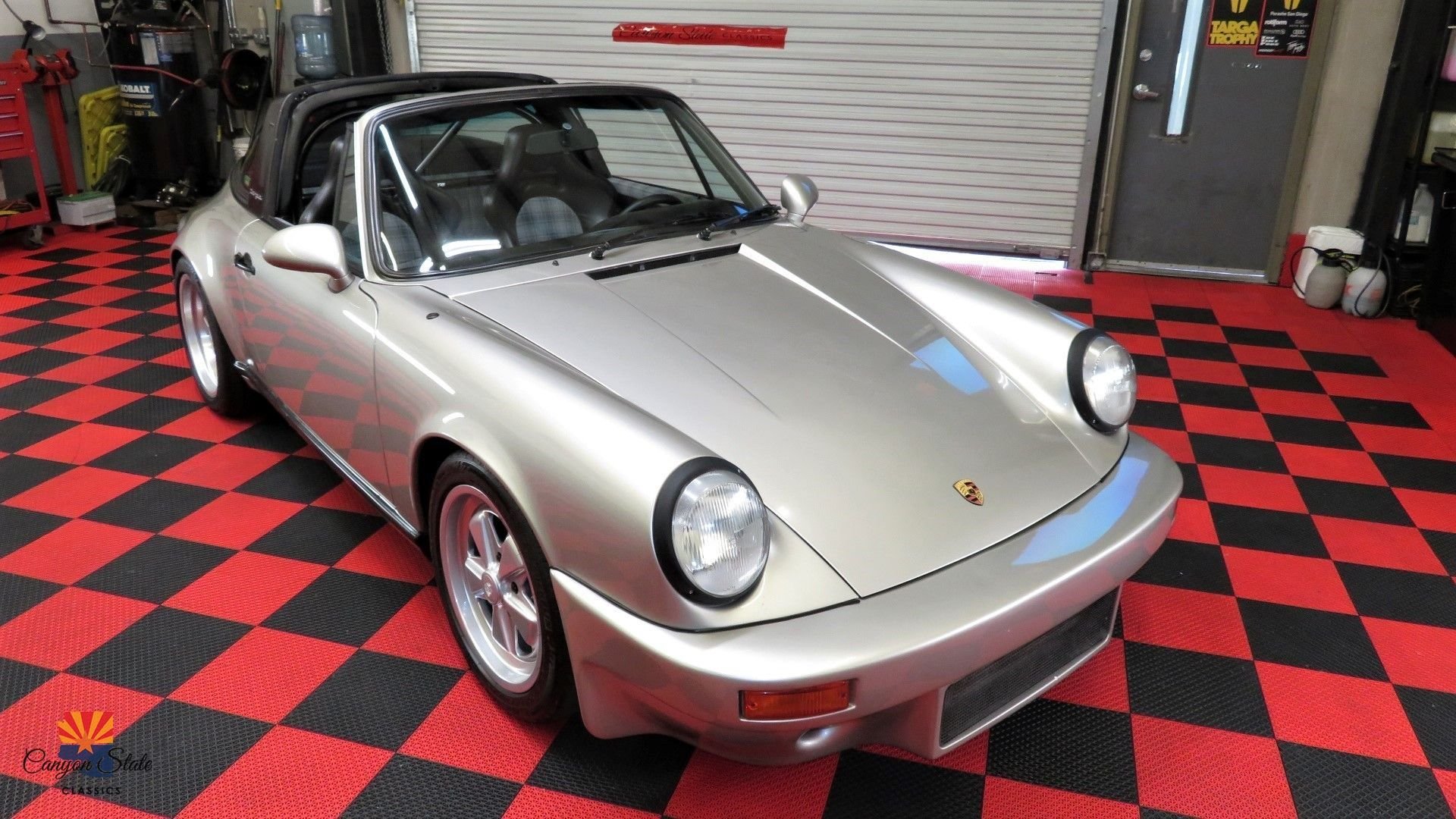 **THIS VEHICLE IS CURRENTLY BEING OFFERED EXCLUSIVELY ON BRINGATRAILER.COM. PLEASE VISIT THEIR SITE AND SIGN UP TO BID AND WIN THIS AMAZING PORSCHE 911 HOTROD!**

This 1983 Porsche 911SC Targa is an extensively modified example finished in its original shade of Zinn Metallic. Power comes from a 3.6-liter flat-six transplanted in 2005 from a 45k-mile 1997 993 Carrera 4S with upgrades detailed below. Approximately 26k miles have been driven since, and the chassis shows 107,500 total miles, only about 1,000 miles since it last sold on bring a trailer in November 2017. Power is channeled through an upgraded 915 5-speed gearbox, which benefits from a $6k overhaul including new synchros just a few hundred miles ago. The suspension system, brakes, wheels/tires, and interior have all been modified for increased performance, and full specifications are listed below. This unique 911SC is now being offered by a dealer with a receipt for the transmission overhaul, a Carfax report, and a clean Arizona title.

The most recent owner has made some changes and better documented this car spending nearly $12k in upgrades & Dyno Testing To Verify Power, Along with PPI since it was last offered to the public. Just in the last few months leak down check and dyno run were completed and yielded the following results: Leakdown #1 3% #2 3% #3 2% #4 5% #6 2%. Dynocomp of Scottsdale recorded a Max Pull of 251.6 HP and 225 FtLb To Wheels on just 91 Octane, With 20% drive train loss This Equals Conservatively 312 Crank HP & a Impressive 270 Torque! This car is a screamer.

The exterior has been modified with an OEM rear wing, Bosch Euro H4 headlamps with a Sucro relay kit, GT Racing front bumper, IROC-style rear bumpers, and 993 side-view mirrors. Other exterior imperfections are listed as stone chips on the hood and front bumper and bubbling paint on the rear bumper caused by exhaust heat. The seller states that the Targa top was just completely overhauled with new headliner and all new rubbers!

To support the increased power, braking was upgraded to a front and rear Brembo GTP kit with a 25mm 930 master cylinder. The brake fluid was last flushed in 2013. The car sits on 17'' Rota RSR Fuchs-style wheels measuring 7.5'' wide up front and 9'' in the rear were just powder coated silver and had fresh Michelin Pilot Sport PS2 tires installed, 225/35/17 front and 255/40/17 rear.

The cabin features carbon fiber shell Euro Plaid seats upholstered in Nappa leather with custom , which are fully adjustable and fold to provide access to the rear seat. Other interior additions include a TRE Targa harness bar, Momo Prototipo steering wheel, Rennline pedals, and a custom hand made exotic polished shift knob imported from Manuel of Mexico which extends shifter up about 3'' closer to your hand. A Pioneer head-unit and MB Quart speakers are present and working for CD Player use only as antenna has been removed. Interior finished off by a custom set of Lloyds mats. All instrumentation works well including the added 930 tachometer. The A/C condenser and compressor are missing, though the fans turn on and the heat works well.

Power is channeled through a 915 5-speed with stock gearing and a Patrick motorsports conversion kit including a lightweight flywheel. It was rebuilt with new synchros in July 2017 around 100 miles ago. A new Sachs power clutch was fitted, and a CV joint was replaced at the same time. A $6,300 receipt is included with the sale. The seller reports that new rear axle assemblies were installed in 2013. Its most recent owner has had a rear deck lid sourced and custom painted, Targa top restored, leak down numbers performed and dyno test conducted resulting in impressive numbers for a 3.6L N/A Motor.

The Carfax dates back to January 1983 when the car was first sold in New York. It was registered in California by 1990, Athough a damage report is on the CF, the car was not involved in an accident.