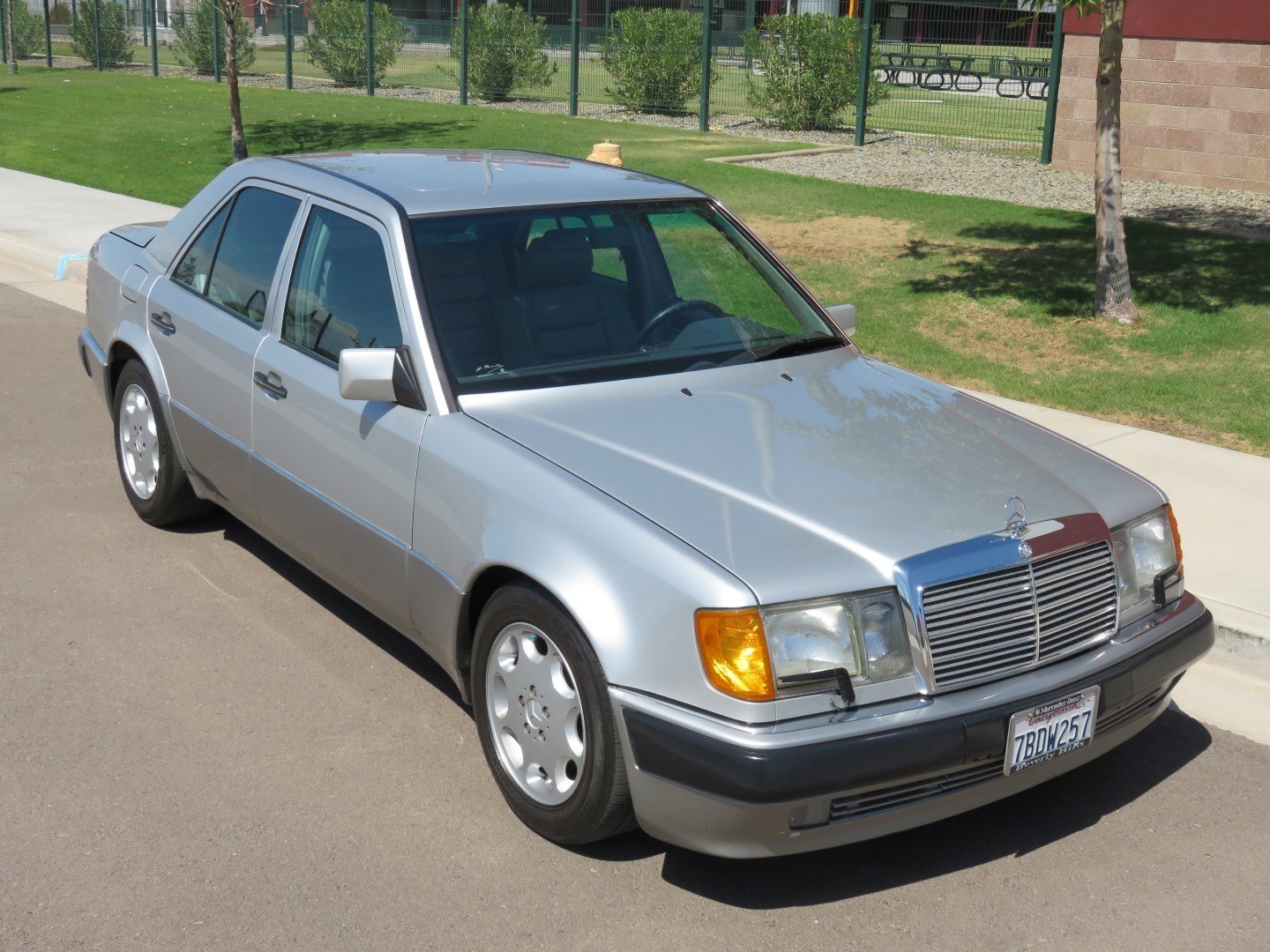 Canyon State Classics brings
to market a low mileage 1993 Mercedes Benz 500E
equipped with the highly desirable 5.0L V8 and factory widebody treatment.
Jointly developed with Porsche, the car was a luxurious sporty sedan that is nearly unanimously regarded to be one of the last cars built by Mercedes with no thought for development expenses in mind. Generously fitted with numerous standard accessories and a 5.0 l v8 engine with 4-valve cylinder heads capable of a raw output of 326 hp, the entirely hand-built e 500
is close to a work of art. And how wouldn't it be with the plenty of parts sourced from the 500 sl roadster, such as the performance 4-piston caliper brake discs? Furthermore, the car was saturated with extra-components with buyers having had few options available for further customization, such as a cd changer and a phone.
The theory was simple: stuff the Mercedes 500sl's wheels, brakes, transmission, and 322-hp v-8 into the w124 e-class. The build process was less simple. The
500e's flared-fender body shell was assembled at Porsche's Zuffenhausen facility and then shipped to the Mercedes plant in Sindelfingen for painting. After that, it was sent back to Porsche for final assembly. There were only 498 units built in 1993 and a total 1,505 units built for the entire line (1992-1994).

This
rare example has only 134,000 miles and 2 senior owner! The car was bought new
in Kentucky but made its way out to the Los Angeles
area by the late 90's where it lived the rest of its life until about a month ago where the car was found in NV. The car received
many
its scheduled services on time with no expenses spared, so you know this
car has been extremely well cared for. This car had an
original MSRP of over $80,000 in 1993, so don't miss your
chance to own it for a fraction of what has been
invested..

The following is a list of options as this 500E is
currently equipped:


The car is finished in beautiful Brilliant Silver with lower charcoal cladding. The body on the car is laser straight,
and does not have even a single door ding. This Benz
has always been garage kept and pampered its entire
life and really shows.
The
car has never been hit, has no accident history, and
still retains all original body panels and no paintwork as evidenced by
matching VIN stickers on every panel. Only the hood received a fresh repaint to fix several heavy rock chips.

The beautiful gray leather interior and
is all original and looks like new. Dash, door
panels,
carpet and seats are in like new condition. The dash
and almost all of the wood panels are crack free and
look like new. Complete set of tools, jack, and  key are also included. Everything works in the car.. lights, gauges, radio, seats, windows, locks,
a/c blows ice cold, etc. The car will also include all
of its original books, quick reference guides,
and
service history. It also has the original full

size spare and tire which has never even touched
the pavement.