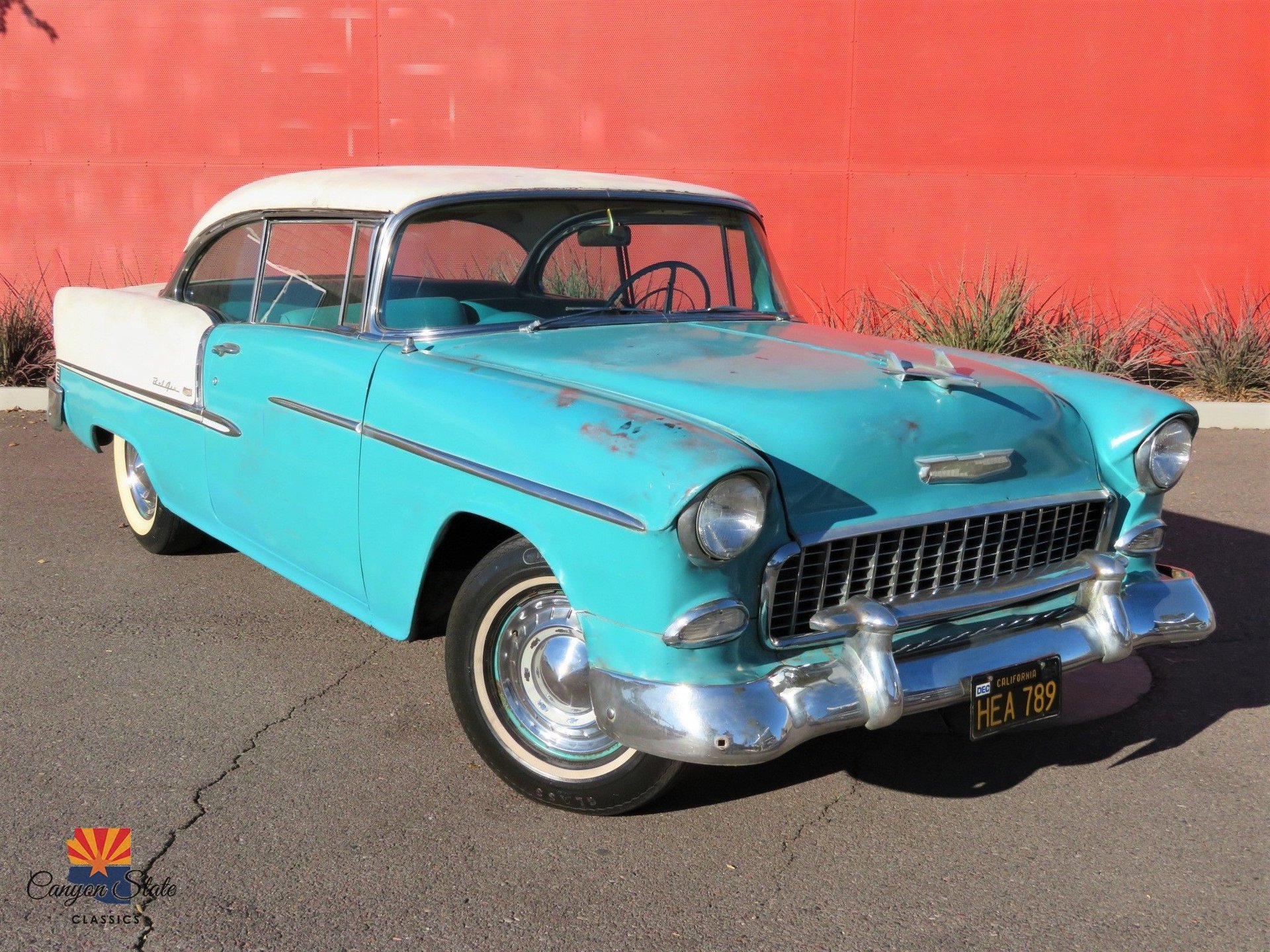 Fresh in at Canyon State Classics we are honored to bring to market something you most likely will never see again. This 1955 Bel Air has remained in the hands of the original family since BRAND NEW! This car was bought in Santa Monica at Hastings Chevrolet on August 25th 1955 By Mr Robert Mushet who is the father of the current owner. This car was his pride and joy and amazingly survived a family of 6 children with no major accidents! The car remained in the fathers possession until the mid 1980s when his wife ordered him to get rid of the car. Instead of it going out into the world, he offered his oldest son the car with the hope that he would some day restore it. The current owner is mechanically inclined and always kept the car up and running to his full ability, never letting it fall into mechanical neglect and always ready to fire up and move around if needed, but admittedly he says he drove the car less than 100 miles in 40 years which has kept the original mileage of this car under 95k original miles! Nearly 40 years have gone by under the current ownership and he has come to the realization he will never have the time or funds to properly restore this car so he made the tough decision to finally let it go to someone who will. The cool thing about this car though is that it can absolutely be driven and enjoyed in its current Patina condition and has far more personality than any $100k restored show queen!

The exterior of the car retains the remnants of the Earl Scheib repaint from 1974 but was repainted in the cars original color combo of Regal Turquoise over India Ivory. This car no doubt had some dings and parking lot damage over the years but was never involved in an major accidents and the underside is probably the most rust free un-molested time capsule I have ever seen on a 1950s era vehicle. Its literally perfect. Amazing what a life away from the salt and corrosion can allow to be preserved so well. All glass is in good condition and original other than a replaced windshield somewhere along the line. All chrome trim is present with nothing missing and all good candidates for polish or rechrome. It even has the optional bumper guards which is pretty cool! All four original wheels and hubcaps are present still wrapped in bias ply white walls.

The interior has also been kept tidy over the years with repairs when needed. The seats and original style carpet were redone in the early 2000s and are holding up well. The original metal dash and wheel are in good condition and no custom stereos or anything were ever installed. Original door panels are still presentable and the arm rests need a little work. The headliner is currently in need of being redone, and that may get done here before the car sells. The doors shut well and the windows work as intended. The turn signal assembly is in need of replacement and is currently inop.

The mechanical systems of the car are all in fully functional condition. The original V8 starts up first bump of the key and doesn't smoke or have any major leak issues. The engine is sewing machine quiet and original style exhaust keeps it quiet and smooth. No glass packs or cherry bombs on this survivor! The current owner spent almost $2k last year having a shop go through and clean out the fuel system, carb, motor and trans mounts and brake systems. The car currently needs nothing mechanically. The car runs drives and shifts just like it did when new. 1955 was the first year Chevrolet offered an optional V8 engine and Mr Mushet had to have it!

Overall this is one of the coolest cars I have had the pleasure to represent. I always get a kick out of going through all the old receipts and taking a glimpse into the past. This car is a rare opportunity to buy a ticket back to 1955 and be the talk of any car show or classic meet you attend. They dont make them like this and never will again. Dont miss your chance, this wont last long. Call Jon @ 480-703-2337